Small copper I think you’ll find.  Been seeing a few, but this is the first one that sat still enough to get a shot of. 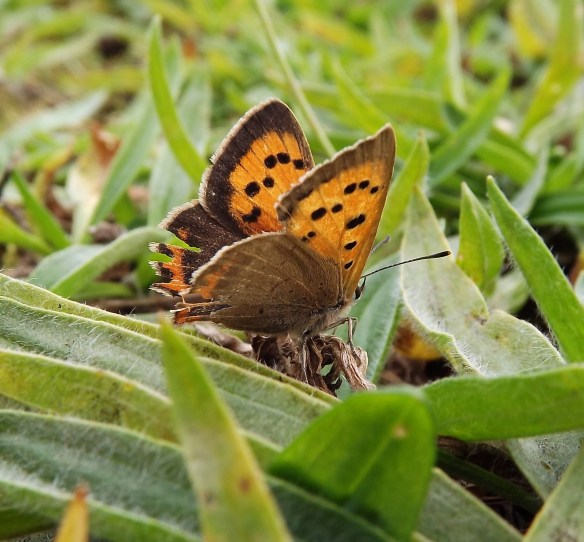 For some strange reason, when I typed that word (beetle) I had a mental image of Michael Howard saying it.  Like he said ‘people’ – peepooool.  Beetooool. 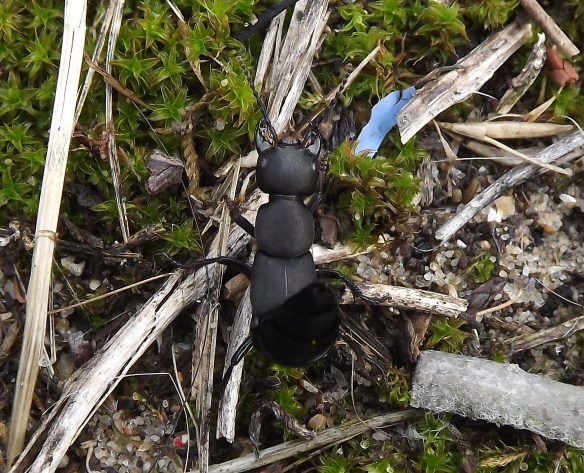 Do you remember those cans of ‘fart gas’ that you could buy when you were a kid? 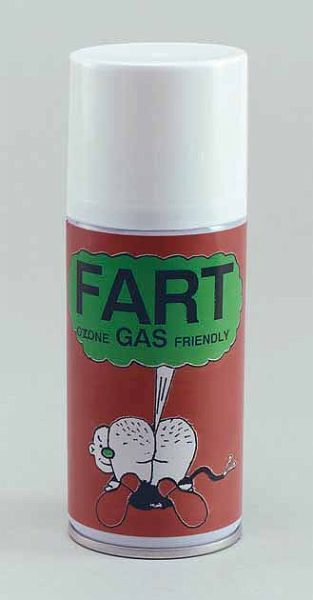 It would generally waste a large chunk of the pocket money that you had saved up for the annual summer holiday, having purchased it after falling for the illusion of actually having a real can of real flatus.  The reality was that the smell was rank, but not really that similar to proper anal gaseous discharge.  When I say rank, I mean rank.  Proper rank.  Not enough to produce instant projectile vomiting (that would be amaaaaazing), but enough to clear a ridge tent in quick time, even in the rain.  Chemically mixed rankness in spray form.  The smell contained in these containers was definitely not pleasant.  I wouldn’t go as far as saying that it was some concoction from the depths of hell, but certainly a little lister demon that may have passed this region had given a little whisper in the ear of the creator of fart gas.  You don’t remember fart gas?  Oh.

Compared to what I had whaft under my nostrils on Friday, cans of fart gas are about as unpleasant as fresh honeysuckle.  Here is a picture of something that really does smell.  Technically, this thing here “really really fucking stinks”. 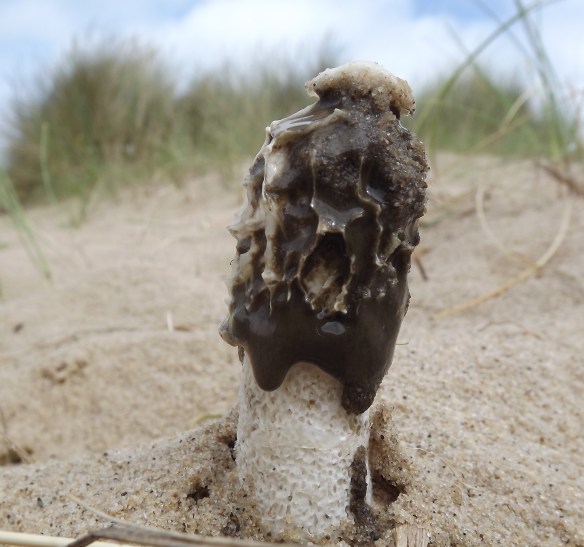 As I approached it, the smell situation wasn’t in my mind but once I got close and the hoard of flies vacated the whaft whafted.  Rankness of another level.  Needless to say, this is a pan species patch tick and evidently it has a rude sounding scientific name – Phallus impudicus.  Gurgle.

Although you might think that an insult, just imagine that it was your actual name!

a conehead doing not a cricket

That’ll be a patch tick and everything like that.  And I identified it all by myself for a change.  My bug book is not completely useless after all…

That patch pan listing thing hasn’t gone away by the way.  There’s no rush…

Like Loading...
This one isn’t too taxing (geddit?), and so far is one of the plants that I am reasonably confident in the ID – Sea Campion  Silene uniflora. 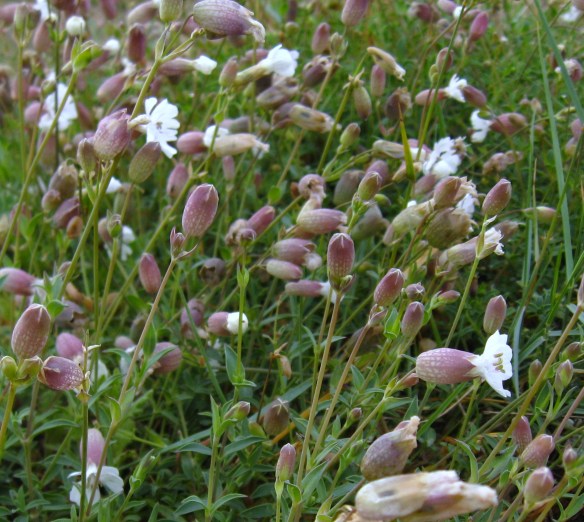 The pan species list now exceeds 100 species, which is a milestone of sorts but there remains plenty still to ID still of all kinds of stuff.  The other day I spent some time watching some Ichneumon suspiciosus – no really.

Bet you can’t much more of this, eh?

This one is straightforward though.

That, Dear Reader, is a Red Soldier Beetle Rhagonycha fulva.  I am more certain of this identification than I am of any chafer of any kind.  But how much attention did you pay to the picture?  Other than the ‘yellow flowered plant that looks like many other yellow plants that I haven’t worked out how to identify yet’  did you see another patch tick?  Oh, yes – they are coming so thick and fast that I cannot keep up the documentary evidence (don’t worry, it’ll give me something to do in winter).  Behold…

That is the caterpillar of the Cinnabar Moth Tyria jacobaeae.  A question raises it’s head.  Is it legitimate to tick a caterpillar for a moth that you haven’t seen (albeit only in the patch).  Isn’t that a bit like ticking a bird’s egg?

Cock, Common, Garden or Welsh?  That is the question.  Something to do with feet.  Something to do with habitat.  I really don’t know, and until a few days ago it would just have been a beetle.  To assist with the definitive identification here are extreme close-up versions of every image I have of the beast, with varying degrees of quality.

So if you know anything about beetles and have nothing to do on this rainy day – chuck your expertise at this lot! 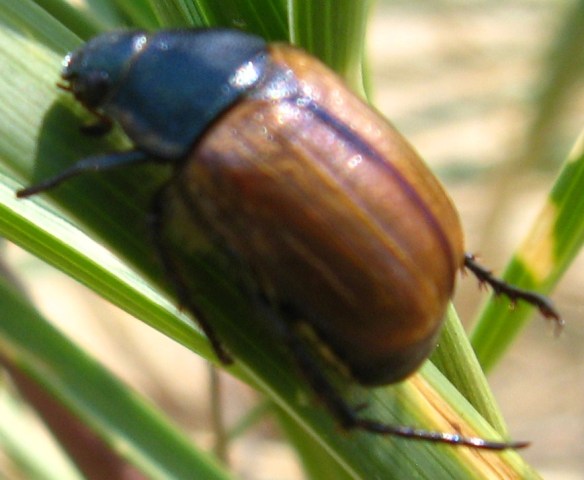 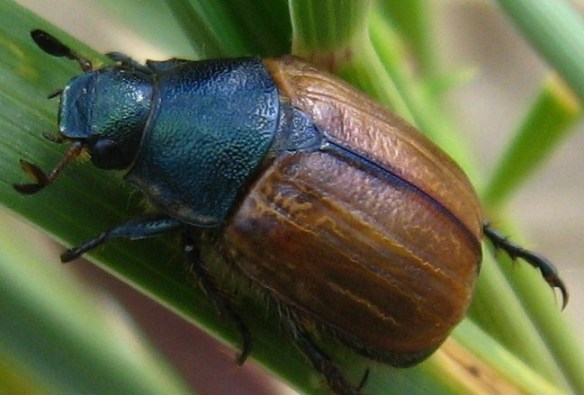 My other option for this blogpost title would have been “ay-up cock” or any equivalent.  But as you can see I have chosen the above.  If for no other reason than to paraphrase the following intercourse.

“I think so, just some mild chafing”

Your internal monologue may be working around a phrase resembling “what on God’s earth is the man going on about now?”

Fair enough I say – best you have a look at this picture of a bug what I saw in the patch yesterday. 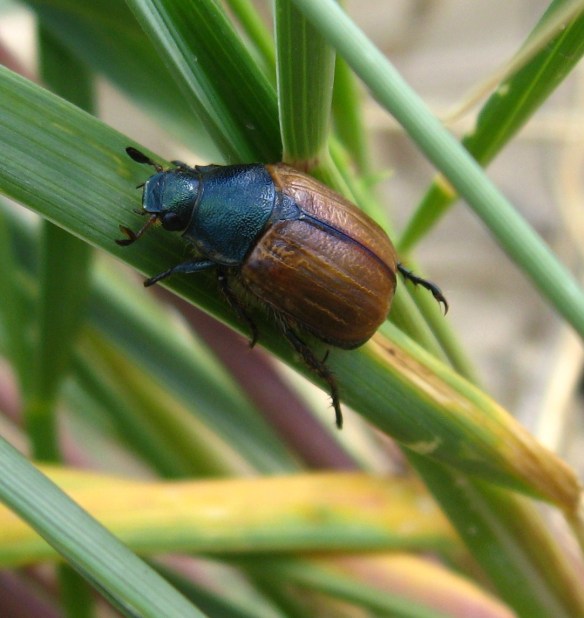 It is, according to my best estimate a Cockchafer Melolontha melolontha.  And according to my (unreliable) bug book it should have stopped flying around a couple of weeks ago.

Nevertheless, fly it does.  A bit.

Another tick on the pathetically small panpatchtickon.

Like Loading...
Do you sometime read posts on blogs and fora where people ask for ID assistance and get annoyed?  You know the kind of thing – I took this photo of a bird and I don’t know whether it is a Blackcap or a Sacred Ibis, can you help?  – it annoys me anyway.  There are those that seem incapable of bothering to identify anything themselves and have 10,000 posts of laziness on line when if they looked in a book or interweb equivalent, they might learn something and stop pestering everyone with trivial ID requests.  Anyway, be rest assured Dear Reader that the ID problem that I present does not fall into this category, absolutely not!  My research has been thorough, concentrated and protracted.  It has caused me to break the spine of my bug book as I have been thumbing so very vigorously, but obviously to no avail.  I am slowly coming to the conclusion that my bug book is rubbish, or I haven’t got a clue.  So here goes, it’s a fly, it flies around a sandy beach with loads of its mates and I don’t know what it is.  Sorry to bother you and all that, what?

a fly doing still, for a moment

More specifically a patch moth that I have been unable to identify.  Any ideas?

orange moth doing stumbling about in the undergrowth

I have seen birds recently by the way.  In case you were wondering…

There has been talk, or perhaps type, on various internet fora lately regarding the phenomenon known as pan-listing.  For those of you are unfamiliar with this term it is not a listing of pans (whether this is for cooking or otherwise) but another use of the word – pan-listing is the listing of every living thing that you have seen.  Absolutely everything.  Without exception.  What an  admirable task you might think.  Listing everything that you have ever seen (within a Natural History framework of course) in a little book or on some check-sheets or whatever.  Simple eh?  Well the chap that has the most pan-ticks in the UK is at a little over 10,000.  Does that sound a lot to you?  It does to me, especially after I thought I’d put some stuff together to see where I was up to, and once I totted up my list I realised that I have seen bugger all.  Honestly, absolutely bugger all.  I thought that I’d seen a few things –  I like to try and identify the odd insect, or an interesting plant, the odd sea gooseberry here and there so my thinking was that there would be a fair few ticks on my list, but how wrong I was.  Even less than bugger all.

However, not being unfazed so easily I gave the matter some thought and wondered if it would be a practical thing to do.  The theory sounded easy at first; just go around identifying everything and then writing it down in a book.   Easy.  With a little bit of thought it occurred to me exactly what everything actually meant and with a little bit of investigation the numbers started to come in and the size of the task began to dawn on me.  Everything.  Flowers, reptiles, plants, molluscs, trees, birds, mammals, moths, butterflies, flies, beetles, arachnids, crustaceans, fungi, lichen, moss,  etc etc.  Want some numbers?  14,000 + fungi in the UK.  600 + birds, hundreds of spiders, thousands of insects, 2500 moths, and the list goes on.  There are literally tens of thousands of ‘stuff’ to identify, all of which I haven’t got a clue where to start (other than flicking through a book of bugs – got, got, need, got, swap etc).  And to put a specific name to some of them you need to get them under a microscope and piss about with their genitals before you can be sure.  No, really.  The question then raises its head – can I really be bothered with all that?  Joan Collins reportedly said that life is too short to stuff mushrooms.  Well I have come to the conclusion that my life is too short to be dissecting the genitalia of Lepidoptera.  And that is the end of it.  No pan-listing for me. No way.

But hang on a one Gossypium-picking minute.  Without doubt the journey would be interesting, but the road is like too long and wide, yah?  So what if the pan-listing thing was downsized a bit?  Would it be more sensible then?  Limit it to just Norfolk perhaps?  Still daft, Norfolk is bloody big and there is loads and loads of stuff in it, still a stupidly stupid endeavour.  No Norfolk pan-listing for me.  No way.

But.  Isn’t there always a but?  But, perhaps downsize it a bit more??  What if I put two and two together.  Go for a spot of pan-listing, but limit it to the patch!?!?!  Ooooh – identify and list every single species that can be found in the patch!  Even then it really is a stupid thing to do.  Have you any idea how many different types of grass there are?  Nah, not doing it.  I’ll stick to the birds.  That is plenty.  Small, insignificant, but plenty for me.

Not that easy now though is it?  It’s out of the bag now.  The creation of a bird list brings out the Lister Demon and his evil temptations, but pan-listing brings out the demon, all his little helpers, the demon’s boss and most of the rest of the hordes from listing-demon-central.  The temptation is difficult to resist.  The whole idea has the potential to be a stupid tempt filled crusade.  In fact I would go as far as to say that it is verging on lunacy.  Stupidity.  Folly.  Trying to identify everything in a patch when you don’t know the first thing about botany or zoology, and not much about birds.  Truly, truly stupid.

Bollocks.  I’m in.  Lets get listing!

In the spirit of the insane new quest, here is a picture of a grasshopper (which I have yet to identify).

a grasshopper doing knee high to what?

Not just a picture of a grasshopper anymore is it?  No, it is sitting on some lichen! AAAaaaaaaaarrrrrrgggggggggghhhhhhhhh!!!!!!!!!!